Awami League General Secretary Obaidul Quader on Wednesday said the BNP’s politics is now fully dependent on television and the media have kept the party alive. “Without television, their (BNP’s) politics would become meaningless to a large extent. Media have kept BNP alive,” he told a virtual press conference on the contemporary affairs from his official residence here. Quader, also road transport and bridges minister, said as the government has given approvals for so many private television channels and the BNP has
got the opportunity to reveal its existence through these channels.

About BNP’s demand for forming a national taskforce on COVID-19, Quader said: “Coronavirus severely affected many countries around the world. I want to ask a question to BNP secretary general Mirza Fakhrul Islam Alamgir. Doyou find any such taskforce of political parties in any of these countries? He mentioned that the UK government formed a taskforce to innovate vaccine of coronavirus and the United States formed a medical taskforce, but those were not political ones at all.

The AL general secretary said there is no need to show the government’s COVID-19 preventive activities to BNP as many prestigious magazines like the Forbes and The Economist applauded the bold leadership of Prime Minister Sheikh Hasina in tackling the coronavirus crisis. Claiming that Prime Minister Sheikh Hasina believes in work, not in propaganda, he said: “If the government commits any mistake, please give us advice to correct it. The premier always welcomes logical advice. Quader urged BNP to play a responsible role in tackling the ongoing coronavirus crisis, getting out of the circle of negative politics.

About Bashundhara Group’s steps to help the government tackle the lethal virus, he said the industrial conglomerate comes forward on humanitarian grounds and sets up a big hospital to provide treatment for COVID-19 patients. He thanked Bashundhara Group for coming forward in tackling coronavirus crisis. On behalf of Awami League, Quader greeted the Buddhist community on their biggest religious festival Buddha Purnima, celebrating the birth anniversary of Gautam Buddha. 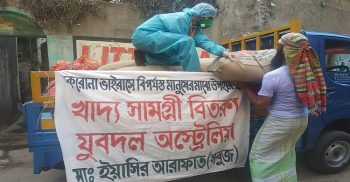 Food distribution at the initiative of Australia Juba Dal