Kalapara (Patuakhali) Representative: A human chain has been held to demand the transformation of Kalapara upazila of Patuakhali into a district. The human chain was organized by the “Kalapara Zila Chai Andolan” committee in front of the local press club at 10 am on Tuesday. Thousands of people participated in the hour-long program with the banner ‘Zila Chai’ of various educational institutions, business organizations and social and cultural organizations.

The speakers highlighted the various development mega projects of the government and all the logical demands to transform Kalapara into a district. Besides, on April 9, in front of the National Press Club in Dhaka, he announced a mass rally and a mass rally. Bir Muktijoddha Abdul Motaleb Talukder, General Secretary of Upazila Awami League and SM Monirul Islam, General Secretary of Kalapara Samiti in Dhaka conducted the human chain. After the human chain, the representatives of the “Kalapara Zila Chai Andolan” committee submitted a memorandum to the Prime Minister through the Kalapara Upazila Executive Officer. 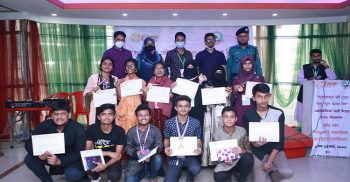 Govt to expand Community Vision Centers to each upazila: PM