Police said Regent Group Chairman Mohammad Shahed Karim was found to have kept mark of his evil skills in education and several other sectors apart from health as he was now being quizzed in remand primarily on charges of issuing fake Covid-19 test reports in exchange of money. Anyone will be amused of his skills as far as fraudulence is concerned,” said an investigator familiar with his interrogation in police custody on a court order.

Dhaka Metropolitan Police’s (DMP) detective branch additional commissioner Abdul Baten, meanwhile, told a media briefing that the investigators dug out evidence which showed it was not the health sector alone, Shahed kept mark of his corruption skills in different arena including education sector. But, he said, of late Shahed cheated people opening more than one fake company in the facebook while supplied PPEs, masks and body-carrying bags under the one such so-called enterprises called Albert Global Garments Factory as COVID-19 pandemic gripped the country.

Baten said Shahed supplied about 50,000 “extremely sub-standard” personal protection equipment (PPEs), one lakh masks and 20,000 body-carrying bags in the name of Albert Global Garments, which “actually is a non-existent entity”. DMP’s chief detective said the medical protective gears provided by Shahed eventually endangered the users life. “We will share our findings dragged out through the investigation to the health ministry and departments concerned as well,” Baten said.

Shahed in now on 10-day police remand after his dramatic arrest by elite anti-crime Rapid Action Battalion (RAB) on July 15 along with a firearm and some bullets as he was visibly trying to escape justice fleeing the country Debhata Upazila of Satkhira by crossing a river. Authorities by now filed over 50 cases, mostly related to fraudulence. 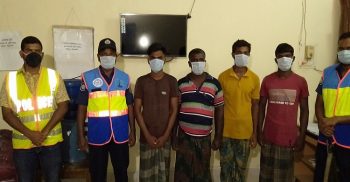