President Abdul Hamid on Sunday attended the namaz-e-janaza of his younger brother and freedom fighter Abdul Hye at his ancestral home in Kamlapur village under Mithamain upazila of Kishoreganj. President’s Press Secretary Joynal Abedin told UNB that the President and his family members joined the second janaza there maintaining the heath rules.

His youngest son Riad Ahmed conducted the namaz-e-janaza where all were wearing PPEs (personal protection equipment), reports UNB. Later, he paid his tribute to his younger brother by placing wreath at the coffin. Abdul Hye was laid to rest at his family graveyard in the afternoon. 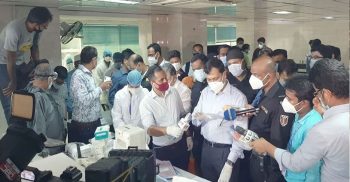